Located in the Steele Creek area of Charlotte, NC A Piece of Havana advertised as being authentic Cuban cuisine, so I joined a friend and visited them for dinner.
They have a very informative website http://www.apieceofhavana.com
which describes their cuisine as Cuban, Spanish and Latin, which swings a pretty wide lasso, so I wanted to sample the fair and soak up the ambiance.
The first thing that I was impressed by is the daily specials. In my opinion, that is never a bad idea, especially on drinks. They had a decent bar selection and their mojito came highly recommended. I love Cuban sandwiches, so I couldn’t wait to try the “Milanese”, a breaded beef steak or chicken breast, with lettuce, tomatoes, ham and cheese in Cuban bread. They use American cheese in the sandwich and when I tried to order it with Swiss (my twist) the server looked confused and slightly hesitated, so I just let it ride with the American cheese as-is. My friend ordered the homemade chips and guacamole and it was really good. My sandwich was good, it came with a side and they featured a good bottled beer special that night. We also got a mojito and it was as good as word of mouth suggested.
A Piece of Havana Restaurant was created by a Cuban Family in Charlotte to celebrate their cultural heritage and their family Cooking tradition. One of the owners of the restaurant, Juan Plasencia has a love of cooking from his mother, who is a graduated Chef in Havana, Cuba. His dream of bringing those authentic Cuban dishes to Charlotte has now been realized.
The Menu appetizers include Papa Rellena (Stuffed Potato with ground beef), Empanadas and Tostones Rellenos de Camarones. Entrees include such specialties as Arroz con Pollo, Bistec de Palomilla, the very popular Paella from Spain (a seafood mix with Saffron yellow seasoned rice cooked with beer) and ropa vieja (Shredded Beef) a traditional Cuban dish. They have a decent selection of wines, Latin-American cocktails, domestic and imported beers as well as their famous Mojitos. They also have Cuban style sangrias by the glass and by the pitcher.
The design of the dining room is a recreation of the early 1900’s in Havana, Cuba. It does create a warm and cozy feel. The chandeliers make it sort of dimly lit and romantic. There is a lot of Cuban art on the walls and they play Cuban music for background ambiance through the week, with live music and DJ’s on the weekends. This seems like the type of place my man Ernie Hemingway would have visited in La Bodeguita del Medio in Havana to get loaded on Mojitos and Daiquiris, then fall into a hammock and scrimshaw a few classics. Ah yes, Big “Ern” was a wild boy. No doubt.
A Piece of Havana
11126 South Tryon Street
Charlotte, NC 28273
Phone: 704.588.7883

A Piece of Havana features live music every Friday and Saturday from 7PM to 10PM.
Fridays are “Havana Nights” with a DJ spinning International music.
Skip Pulley
Editor in Chief
at March 25, 2017

Email ThisBlogThis!Share to TwitterShare to FacebookShare to Pinterest
Labels: A Piece of Havana

the Sushi Review - Yama Asian Fusion Good sushi and decent service, but make no mistake, you are paying for area and atmosphere. I was impre... 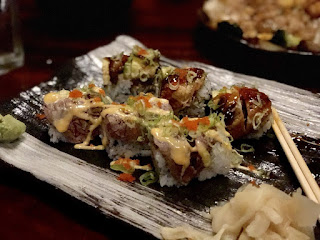 Check out everything Charlotte NC has to offer.